If so, drop us a line by using our FEEDBACK page, you can even include a small picture (.jpeg under 2 mb). 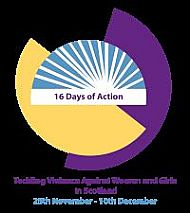 International campaign to raise awareness of violence against women.

During the campaign, organisations throughout Argyll and Bute will be giving out a clear message that domestic abuse will not be tolerated under any circumstances.

Key landmarks, such as McCaig’s Tower and Highland Mary’s Statue will be lit up orange, in honour of the theme: “Orange the World: Generation equality stands against rape”.