Scottish Forestry is the Regulator, Stuckenduff & Letrault farms are the landowners and Scottish Woodlands Ltd is the applicant acting on behalf of the landowners.  The Confederation of Forestry Industries have produced a Guidance Note:  Confor.

Click on this link to read the initial response of the Community Council which was sent to Scottish Woodlands in April 2020. It appears not to have been considered when the Documents posted below were drawn up.  Our initial responses was a large  document and it has been necessary to reformat it in order to post on the website. Click here for a summary of the main points in this document.

The Documents posted below were supplied by Scottish Forestry on December 4th 2020 to Rhu and Shandon Community Council. Then on 24th December two applications were posted by Argyll and Bute on the Planning site. We are trying to discover the status of these proposals 20/02234/FGS and 20/02235/FGS.

The Planning Applications caught us off guard. We had hoped that the documents we received from Scottish Forestry on December 4th did constitute a consultation, since many of the  issues that were included in the response that we had sent to the agent, Scottish Woodlands Ltd, in April,  had been ignored. We felt that most  could be resolved in the consultation process. When the Proposals were posted on the Planning website on 24th December and we felt that  we had no option but to object to the applications.

We do not object to the creation of the Woodlands in principle, but we do object most strongly to the use of  Pier and Station Road.  Our full submission, too large to post on our website, can be view in on the Argyll and Bute Planning site. Information on how to use this site is posted on our website if you want to read it. We have also posted a separate short Objection to the use of Pier and Station Roads. 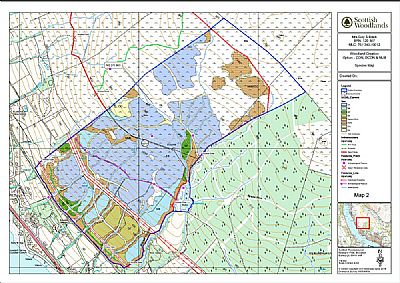 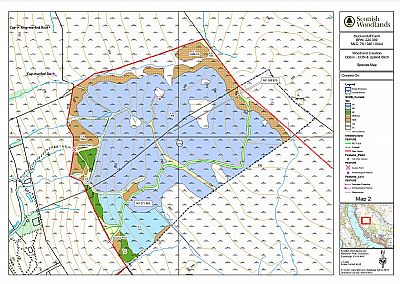 You can expand the size of these maps by placing pressing CTRL + on a non-touch screen.

The white areas within the boundaries of the plans above represent Open Land, which I think is deep Peat bog.

Channel 4 News recently ran a story on the Forestry Commission.  It refers the value of Peat bogs; preserving these is better for the planet than growing trees! I cannot link this video from the website, but will include it in the next Newsletter, if it is technically possible. The link is below if you would like to see it; it is well worth a look!

Certain details of these schemes will be displayed on the Public Register of the Forestry Commission for 28 days to allow members of the public and other interested parties to comment. You can access the register on the forestry website.